Tamales are always a major undertaking, especially for someone who reads tamal recipes, rather than actually makes them. It had been about twenty years since I last made any by myself. Things had to change, and tomorrow being Día de la Candelaria was as good a reason as any to put my hands to the metate. I mean, KitchenAid mixer. I really don’t even own a metate, but greatly admire Lesley, blogger of The Mija Chronicles, for her metate work, when she probably has a food processor and KitchenAid sitting on her kitchen counter. I have been vicariously working on the metate with Lesley for months. And vicariously making tamales with other bloggers. That changed today, when I made Tamales de Chocolate.

Making  tamales took longer than I thought it would, but that is often the case when making a new recipe. First, the corn husks had to soak for two hours. The masa and chocolate mixture was chilled in the fridge for one hour for added tenderness. Then the filling and tying, then two hours to steam the tamales. By the time they were done, there was barely enough light outside for a few photos, but what a great way to start our evening with a steaming pot of chocolate tamales.

This recipe is adapted from one by Rick Bayless at Frontera Kitchens. Rick uses pulverized Mexican chocolate. I used cocoa powder, and coconut oil instead of butter. Russ just about flipped when he tasted one, saying it was better than the chocolate tamal I recently brought home from the market. He also thought a bit of Mexican crema spooned over a tamal would be nice and offered to buy a carton tomorrow. (Update: crema with tamales de chocolate is great!) 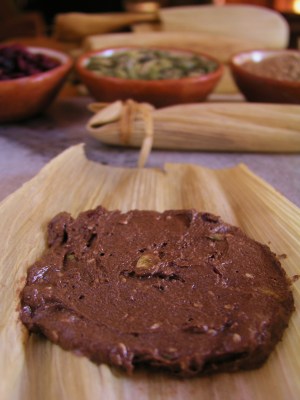 Diana Kennedy says to place a penny in the bottom of the tamal pot. When it stops rattling, the pot needs more water. As she has made her share of tamales in her time, I followed her directions, wondering if pesos would work just as well. Not wanting to take a chance that pesos might be too heavy to bounce around, I used two pennies and they rattled nicely.

Día de la Candelaria is a religious and family celebration throughout Mexico, when tamales and atole are served to friends by the person who bit into the little doll in their piece of rosca on January’s Three King’s Day.

Tamal is the singular word in Spanish; tamales designate plural. There is no such word as tamale in Spanish.

If chocolate is considered food for the gods, champurrado, chocolate atole, must be their drink. February 2 is Día de la Candelaria when tamales and atole will be served. Las mujeres (the women) are already grinding cacao beans to make chocolate for champurrado. I’m taking the easy route, and using Ibarra chocolate, the sweet table chocolate used for making hot drinks.

Russ and I were touring the colonial city of San Luis Potosí when we first encountered champurrado on a plaza in front of the city’s baroque cathedral. This has now been many years ago, but the memory has stayed with me. I can’t remember my first taste of chocolate candy or my first bite of a juicy peach — I was too young. But champurrado came into my life when I was old enough to fully appreciate and remember its smooth chocolate richness. I’m sure I immediately had a second cup. I hope I did.

And somewhere in the mountains, when we were still traversing Mexico with our vintage Avion trailer, we found atole strainers made of woven horse hair in a village market. The hand-woven mesh of dark hair was stretched across rough, hand-cut hoops of pinewood and tied onto the hoops with fibers, and meant to strain out the larger bits of masa. This was a handcraft we had never seen before, nor have we since. We bought three graduated sizes of strainers, but I never use them. They are appreciated as a craft from a by-gone era. (They are in the background of the top photo.) Cheap, plastic strainers are now in every Mexican kitchen, including mine, and that is what I use when making atole.

Día de la Candelaria marks the halfway point between winter solstice and Spring equinox. It is the day tamales are served to friends by the person who found the little doll in their piece of Rosca de Reyes, Three Kings Bread, last month on El Dia de los Reyes, which marks the end of the Christmas holidays. If your slice of rosca hid the baby doll, you’re about to host a tamales and atole fiesta this week.

I could have used whole cocao beans, ground with cinnamon, but I went the easy route. Someday I’ll try grinding beans with cinnamon, but in the meantime, it’s so easy to open a package of Ibbara tablets, and it’s how 99% of mujeres in Mexico are making champurrado.

Chocolate is made from seed pods of the cacao tree (Theobroma cacao). “Theobroma” means “food of the gods”. The Mayan people knew cacao had divine associations. It was used in their rituals and consumed in great quantities by the Aztec emperor Moctezuma.

Atole has sustained people of Mexico since pre-Columbian times. Taken as a nourishing gruel, it can be sweetened with piloncillo, an unrefined sugar, and sometimes fruit. For special fiestas, champurrado — chocolate atole — is served with tamales.